As shown in the previous devlog, space projects will make their appearance at the launch of Early Access. You’ll need to use your trade routes to export resources to them, and as we will have more total trade routes than in the prologue, the interface design we previously had needed an upgrade.

Now you will be able to easily edit your imports and exports however you wish, as long as there are the same amount of available import and export routes at the bottom (currently shown as 0). With this interface, you will also be able to easily export resources to your space projects to reap their benefits.The instant trade button has disappeared as it did not fit the idea of ships traveling between Earth and Mars over time and it just made the interface more cluttered with buttons.

As the panel now takes more space, you can collapse it with the new top button at the top, this will only show the arrows so you still have all the needed information on a quick look.

The old and new trade panel. The space projects are on the right in the second image.

In the prologue you were able to increase the ocean level over time by draining your aquifers. In the main game this option now instantly extracts the water for the ocean in one turn, depleting the aquifer and allowing you to construct a new building on it. This change gives you more accurate control as to when you want to let the ocean rise rather than the slow ocean increase which could lead to unwanted flooding of cities and locations. 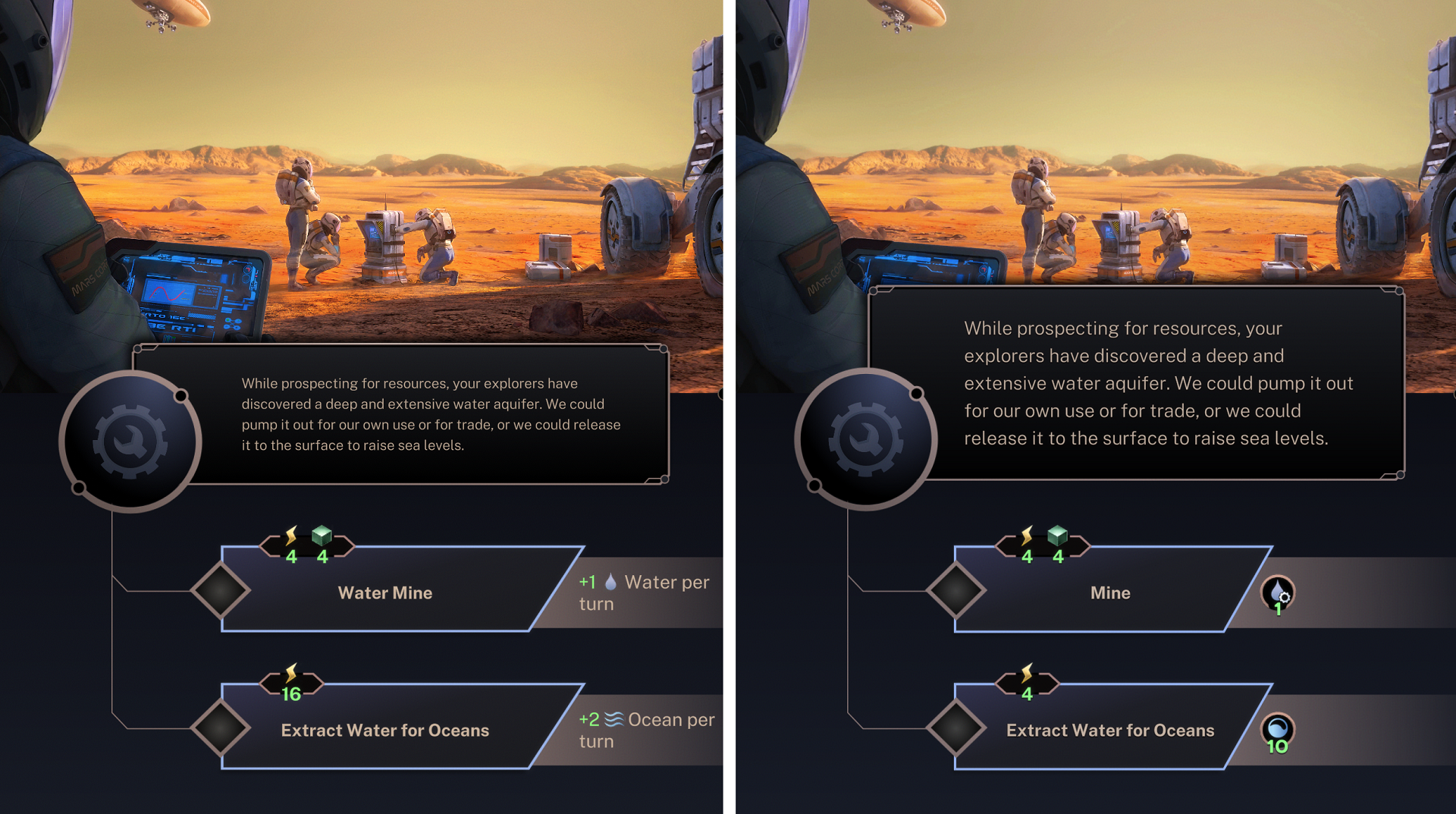 We now have unique cities with different slot layouts, and with new special slots providing local bonuses. This introduced more choice and consideration and to avoid an overload of information, we have made the “plain city location” a specific location which has to be discovered like the crater and lavatube city locations (and thus a lot less frequent). Additionally, to help make a properly informed decision, you must now explore all locations before you can found a city somewhere.

In the image below you can see a different slot layout, a “fertile ground” slot (food producing buildings on it produce +1 food) and a “natural sight” (provides +2 support to adjacent populations).

An example of a new city layout with special slots.

In the prologue you could directly spread life by paying its costs. This led to a lot of checking at the end of every turn if you have enough resources to spread a lifeform that turn. And as the lifeforms are hidden behind a sub-menu, it is often forgotten.

We changed the way you spread life to be based on a recharge timer. Now, you can construct a “spreader building”, for example a bacteria spreader, on a planet location. Then this spreader building will give you an action to spread life that you can use every couple of turns (duration depending on the lifeform). The building will remind you when it can spread a new lifeform again, so you don’t need to check it yourself anymore every turn. Some leaders will now also be able to genetically modify lifeforms, lowering their requirements to be spread.

As mentioned in the previous devlog, the game now has a goal which is different depending on each scenario. There is no limit to the number of turns you can play but you must reach the goal before your total support reaches 0. Winning a game often takes about 60 to 70 turns. With all the new elements to consider this will usually take a few hours. Some examples of goals are: “fully terraforming the planet” or “getting a specific amount of prestige from spreading life” or “mining a specific amount of resources”... And in addition there are multiple difficulty levels per scenario. This makes replaying the game more varied and provide more interesting challenges.

The new goal bar above your current population support.

We’re very excited that the game will finally release so soon, and would like to thank everybody again for playing the Prologue and supporting us!

See you in a week with the game’s EA release!