May has gone-by in a blink and June is around the corner, bringing sun and the long awaited Steam Festival in which we’ll participate (meaning you can try a short demo!). In february, while checking out the previous Steam Festival, we tried another game called Slipways, an awesome indie game by Beetlewing where you expand a space empire by exploring, developing planets to create resources and connecting them with "slipways" to satisfy their needs. The game is easy to understand and yet I managed to spend hours at a time building my empire. They released a few days ago and we highly recommend checking it out!

An exciting challenge coming up for us is the Steam Festival for which we will have a public demo. We have been working hard the past few months to make it as polished as we can. In particular lately we have been working on the tutorial.

Creating a proper tutorial is a fascinating and complex task and we have been going back and forth on the best way to approach it. You can go with a very direct approach where you construct an experience and make sure the players go through it. The downside of this can be that the players feel that they are being hand-holded too much, and removes the experience of discovery and freedom.. And on the other hand, you can have a more open approach and just give him tips to introduce him to the important gameplay concepts. In this case the challenge is that the player might be derailed from the best order in which to learn things.

In this iteration we have decided to go with the more open approach. For example instead of having an objective: “explore a region”, with an arrow pointing at where to click and forcing the player to do it, we will have an objective saying “find a resource deposit”. There will be a soft highlight of the proper button when hovering over the objective to help you out if you want to, but otherwise it will be up to you to actually do it. You can still continue playing however you want if you do not wish to follow the tutorial. 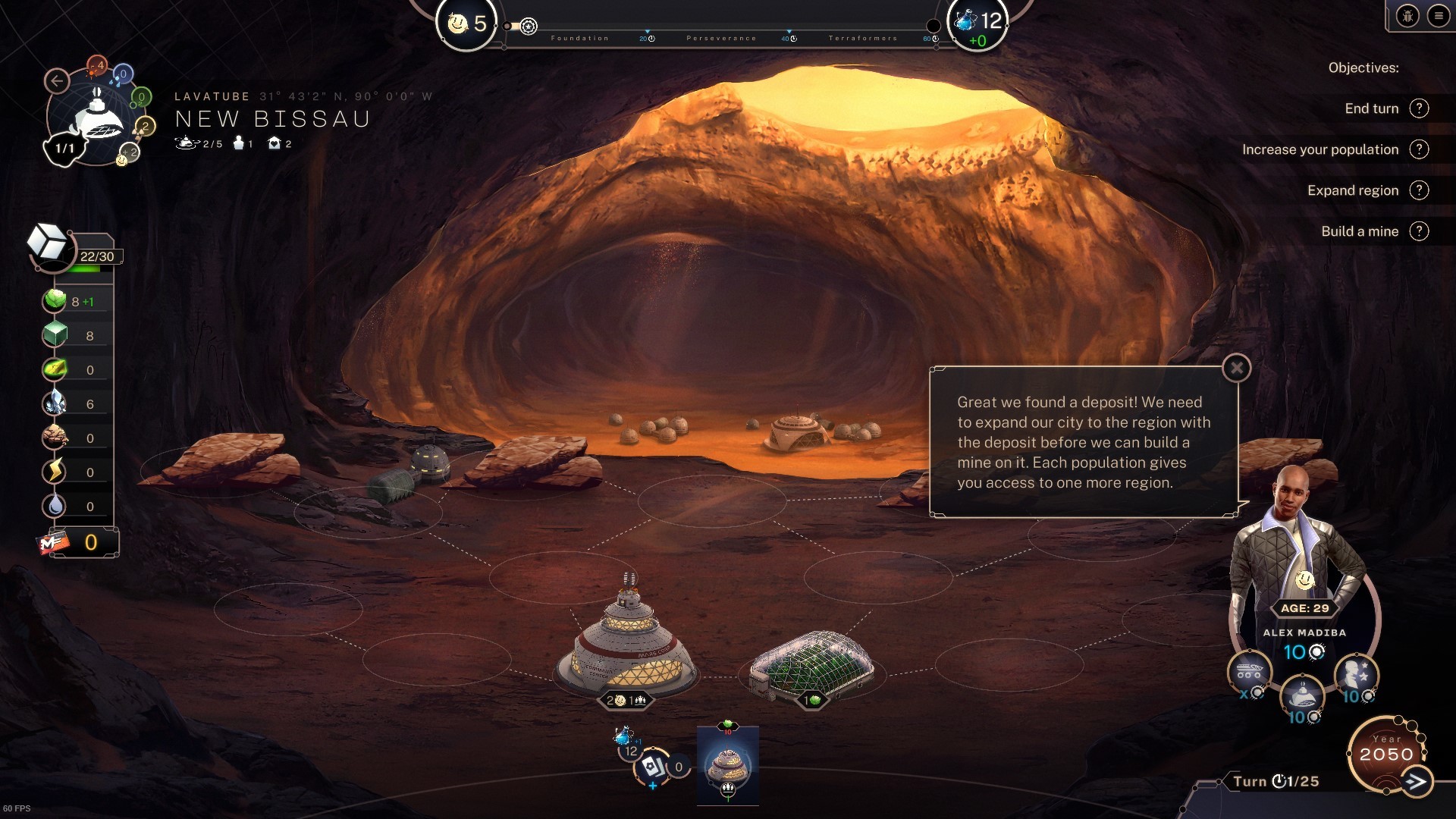 Your leader providing tips and objectives to learn the ropes.

Another challenging design in the same vein is how to propose balanced and varying content every game. How to make each playthrough feel different and yet still be balanced with a proper set of choices for the player to make a plan with? We tried multiple approaches from fully random to fully designed. Recently we settled on a complex system which works with an imaginary deck of cards.

If we take the planetas an example, although some aspects of Mars are similar every playthrough, a lot of things will be procedurally generated. For example we want to make sure that the player starts in a location with access to a decent amount and variety of resources, but not the same resources every time. For this we came up with a "deck" system. Basically we add a certain amount of resource locations to this "deck" and a certain amount of empty locations. Then, starting from the initial region the player starts in, the game randomly places locations from this deck outward. After every couple of picks, new resource locations and empty locations are added to the deck to refill it. In this way there is a lot of variety, but the game will remain balanced every time you start a new session. 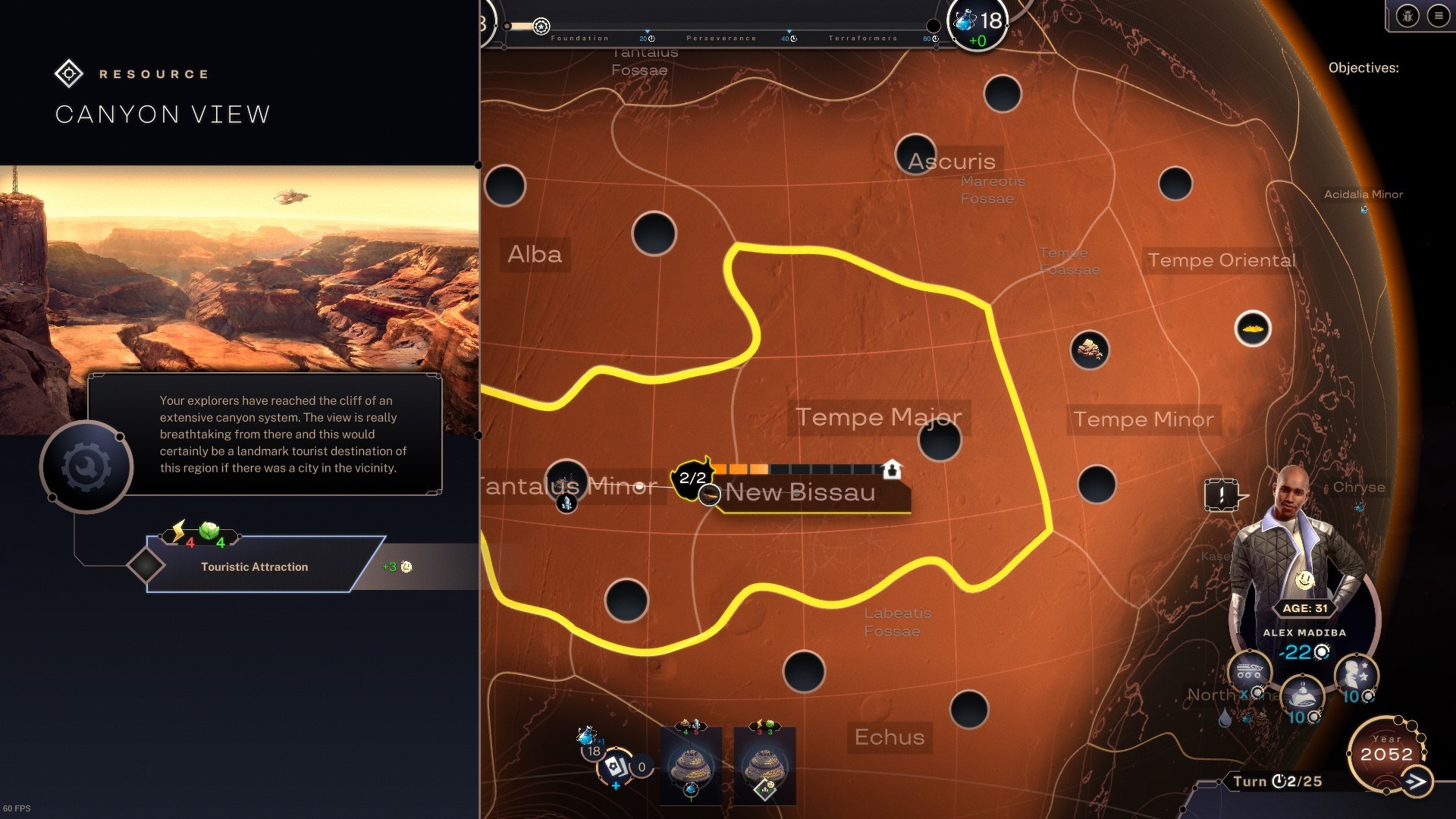 A partly explored map around the starting area

This month we have also started to do a new pass on sound design with Frederik who is doing awesome work. Hearing all the soft clips and clicks when interacting with the user interface feels very satisfying. And the different ambiance sounds linked to city size or planet zoom level really bring the game alive.

Our goal is that the sound design gives you proper feedback on your actions and makes them feel more “there” while still remaining quiet enough that you don’t think about them. We also want the game sounds to have a material feel as it takes place on a planet and not in space.

We have also started working with the composers from Sinephony to create new tracks for the game with the same ideas in mind. The work they did so far is really great and we hope you will like it!

Until next month after the Steam Festival!