In May we further progressed with the game design, prototype and artist & music selection. Also Alexis and Seb attended Nordic Game festival in Malmö to present Terraformers. Read on to learn more!

Before I update you on the progress we made, let me first introduce myself as I haven’t written one of these devlogs before and didn’t appear on many pictures yet. I’m Jasper, a 25 year old Game Designer from Utrecht, the Netherlands. I worked together with Seb and Alexis at EverdreamSoft before, and when they asked me to join the Terraformers project I was immediately excited.

I had, though, planned to travel for about half a year. So I decided to combine my passion for making games and travelling and started working remotely. So I’m based in an exciting coworking space in Bali now, could be worse!

Some of my recent favorite games are Civilization, Slay the Spire and Evolution: Climate (boardgame). But I like to try out as many games as I can to get the most inspiration for Terraformers.

My main expertise is game design, so that is what I’ve been focusing on in the past months. In the coming weeks I’ll write a special devlog describing some of our ideas and iterations to include you more in the process.

This month started with attending Fantasy Basel, the swiss Comic Con to present our game. It was very interesting and the first time we were showing our concept to a wider audience. The feedback overall was positive and we learned quite a bit on how to present it and on what people like. Specifically we realised we were too much on the “prototype” side with not enough visual elements and interaction as we would have it in the game. We had to say constantly “this will be different”.

As we were heading to Nordic Game 2019 to present the game to other devs and publishers later in the month, we then worked hard to include all of this. We did a full rework of the UI and where the interactions take place. For example, before you just clicked on a button and then on the planet to create a new colony. Now you ask one of your colonists to go found a new outpost at some location on the planet.

Nordic Game was a fantastic experience, thanks to the Swiss Games delegation and Pro Helvetia’s support for enabling that. We got to meet, discuss and show our game to many developers and publishers. The feedback was overall very positive and very motivating. It gave us a lot of ideas and we are excited to explore them and flesh out the game. 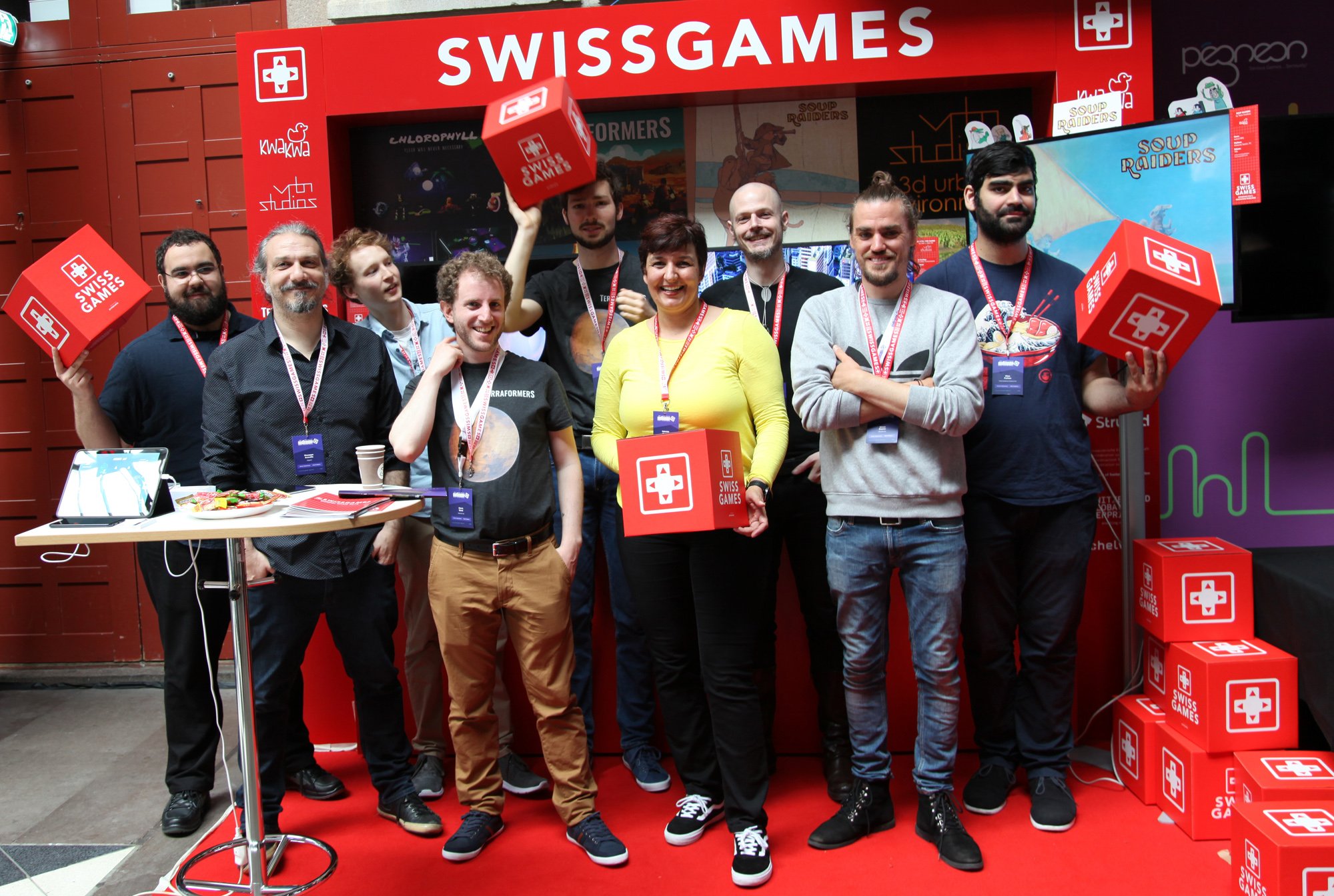 This month development was a bit all over the place, making progress and improvements in different areas. One of the things we wanted to have early is a save game system. It’s usually a tricky feature to implement, so we figured it was a good idea to tackle it right away.

Jasper had worked on the colonist mechanic, and had done mockups that Alexis and me implemented in the game. Here is a screenshot of the current state. 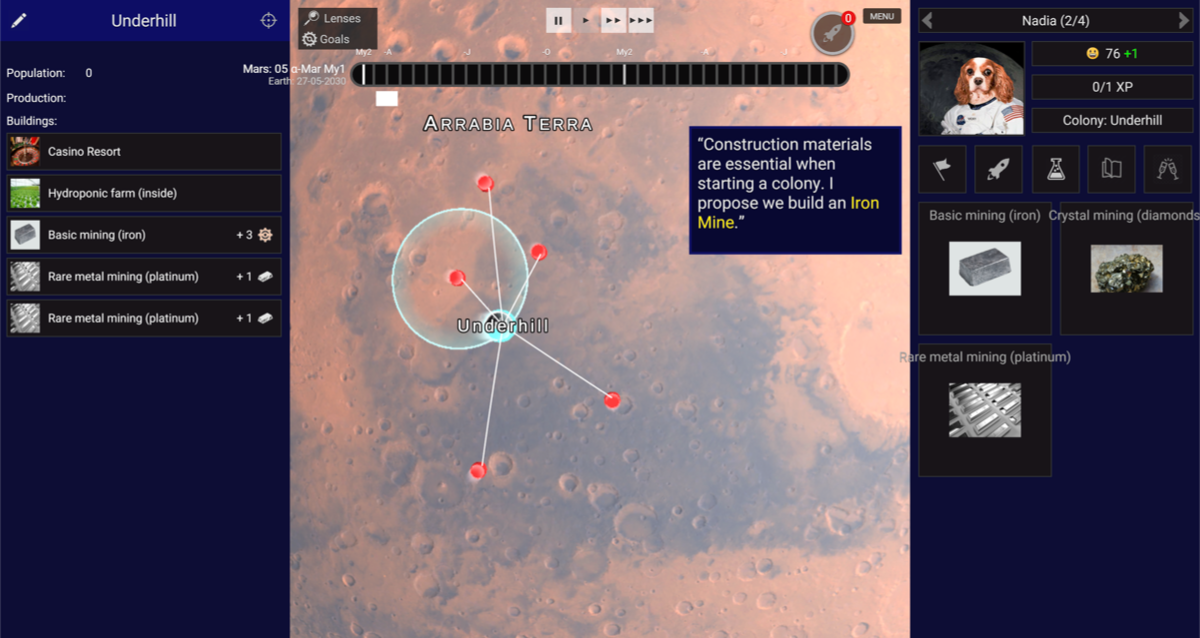 Current state of the user interface (work in progress)

Another big thing was drawing circles around colonies, to represent their influence zone. As it turns out, drawing circles efficiently on the surface of a sphere is not that straightforward. We tried a few technique and in the end managed to get a pretty robust result. (For the technical folks reading, we ended up drawing all the circles in the planet surface in one pass by testing the distance of every pixel to the center of the circle.) 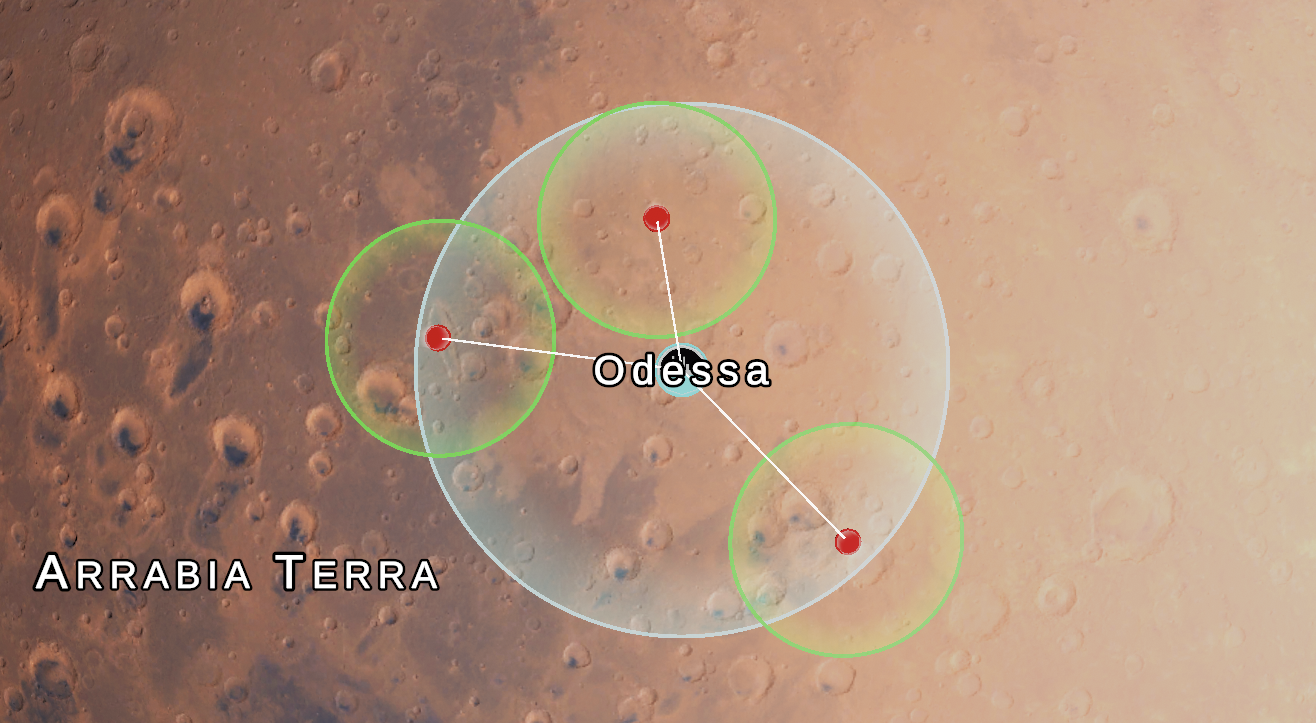 Drawing circles on the surface of Mars

With Fantasy Basel and Nordic Games, this month was heavy in travel time. I took the opportunity to try some things I had in mind for a long time, a weather simulation. Here is an animated GIF of a wind simulation test (showing the potential movement of clouds in the atmosphere). In the final game, it will help determine the places on the planet where it rains a lot, and therefore what type of land is where (rainforest, desert, tundra...).

First tests for a weather simulation

Thank you for reading us, and see you next month!