with this devlog we’re shining a light on the first major Early Access update. Be prepared, as this update will go live on July 18th! Here’s an overview of what to expect:

As was requested by many players, we will add a custom mode in which you can define what type of game you want to play. You will be able to select the pace at which expectations rise (or even fully disable them), choose the frequency of natural disasters and select how long the game should last by selecting an amount of victory points, or even not define any end goal and just continue playing for as long as you want. The game will then calculate a mastery level, to give you an indication of how your created game compares to the scenarios in terms of difficulty.

When starting the game, a specific “seed” will be generated. By sharing the seed, you can challenge someone else to play the exact same game (even with the same map generation and projects/leaders presented).

As the endless game can last for a long time now, we have also added randomly generated leaders for the longer games. These leaders will have a shaded portrait and randomly selected skills, but come without specialization. This feature is also active in normal scenarios. 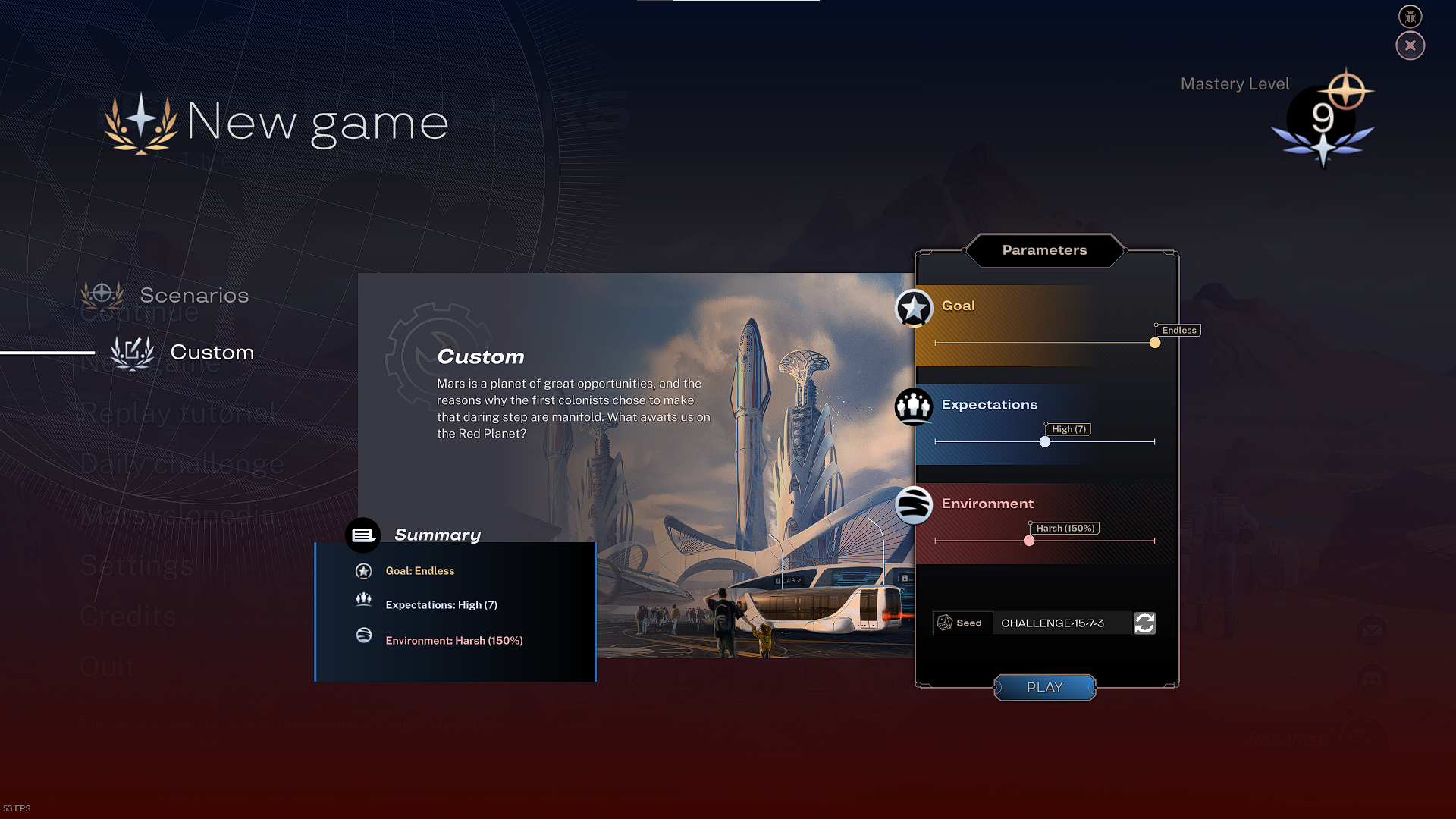 The aspect that will have a significant impact on gameplay in this update is the introduction of Technologies. At specific turns, you will be able to choose 1 of 3 technologies (though you can speed up this proposal process by constructing “Applied Science Centers”). 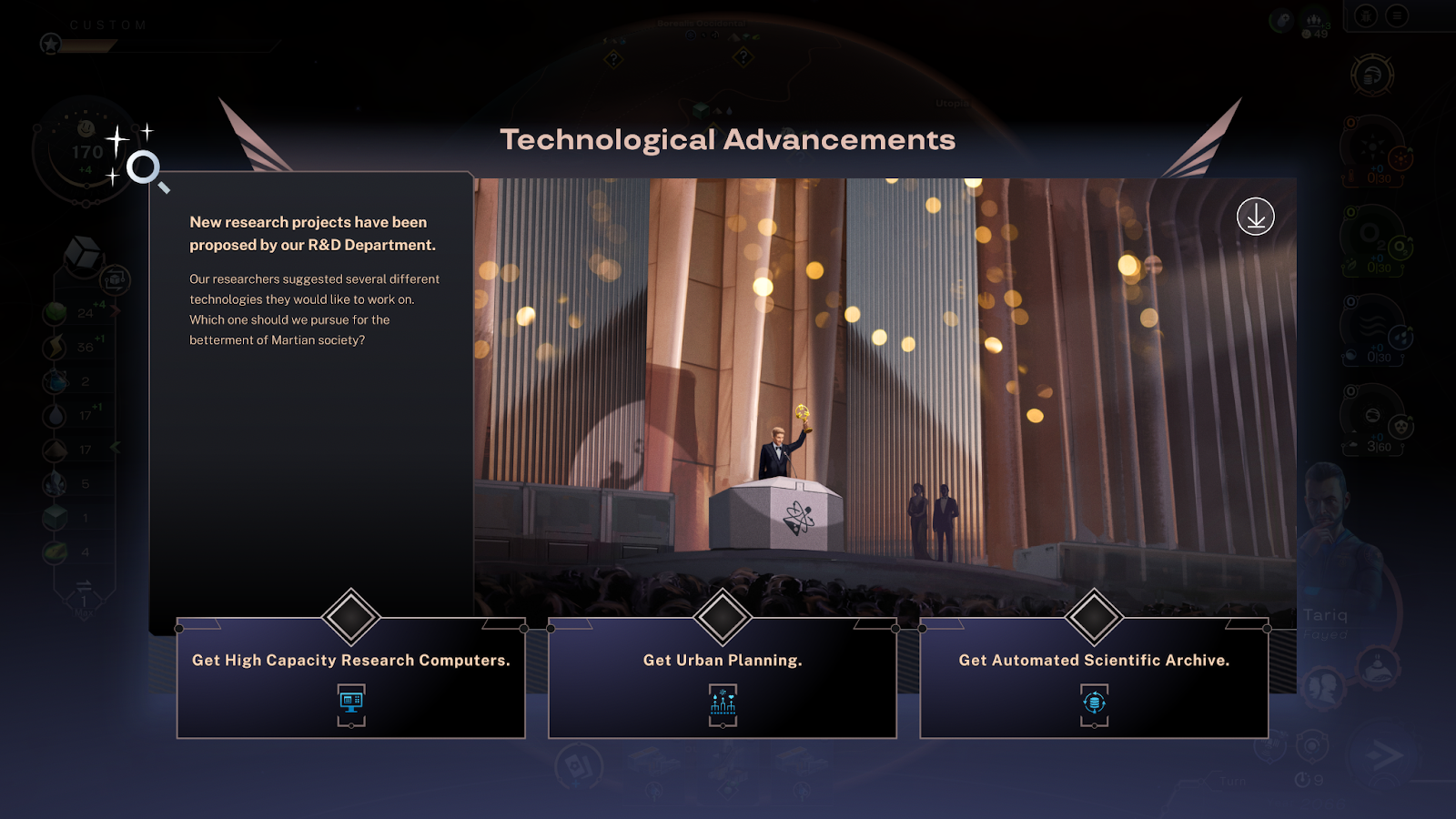 Another widely requested improvement has been to have clearer information when spreading lifeform. For this we are adding two improvements:

We hope that this will help new players understand the lifeform spreading flow better, and that it will help experienced players have a quicker overview of where they can spread each lifeform. 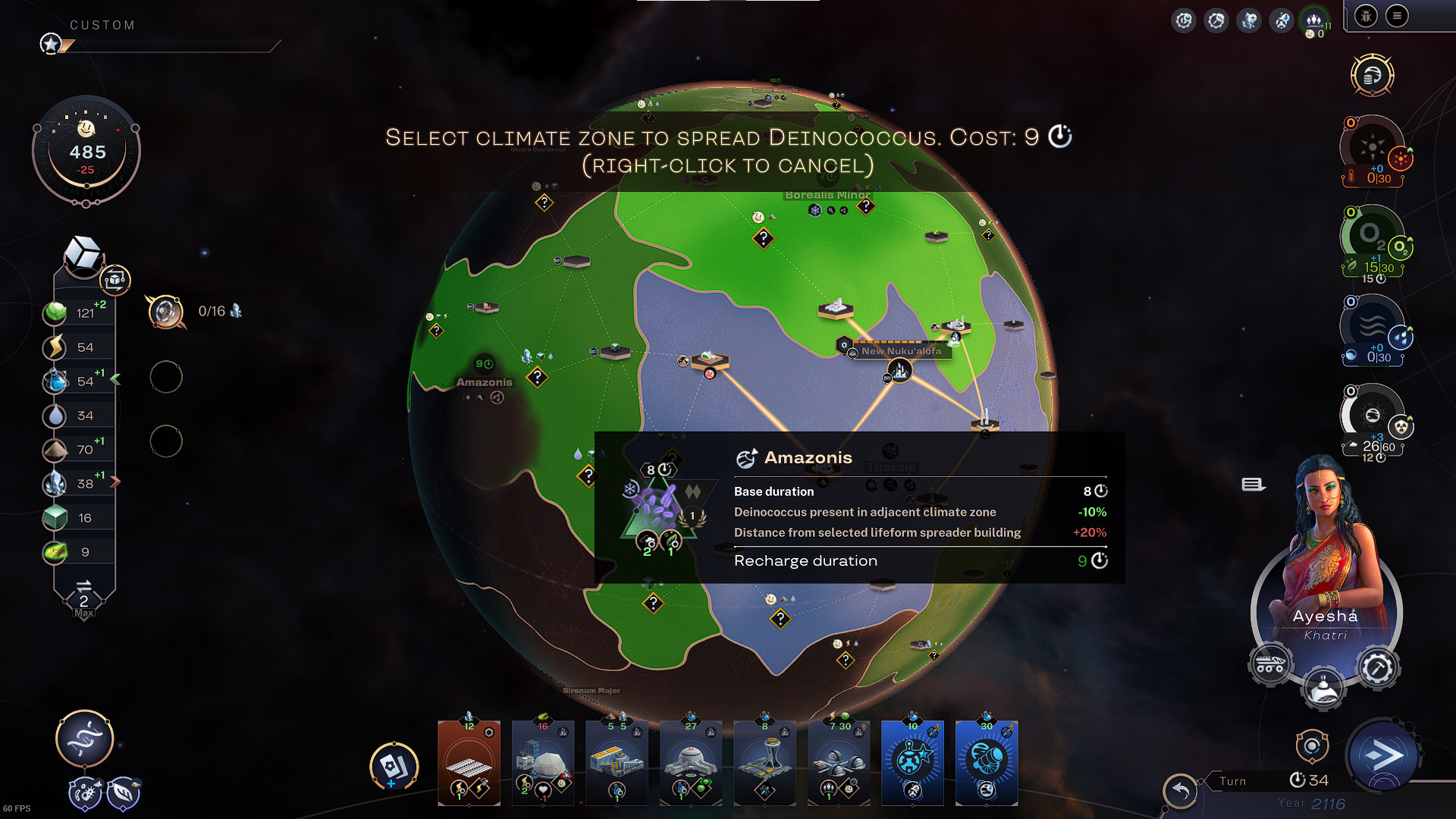 Climate zones will display different shades of greens and a detailed tooltip for spreading lifeforms.

Finally, we’ve added a new trophy: the “Platinum Trophy”. This will replace the current golden trophy (complete the scenario in 65 turns or less). The golden trophy will now be 70 turns, and silver 80 turns. You will receive 5 mastery points for the Platinum trophy. All trophies will be automatically updated, so you can expect your mastery level to increase upon launch of the next update! We’ve also added that if you have completed a more difficult entry in a scenario, you will get the same trophy in all easier entries of that scenario. With these additions, you can jump ahead to more difficult challenges faster. Our goal is not to lock content behind grinding but to provide an increasing challenge as you get better at the game. So if the early levels are too easy, this system allows you to jump ahead to more challenging levels faster. 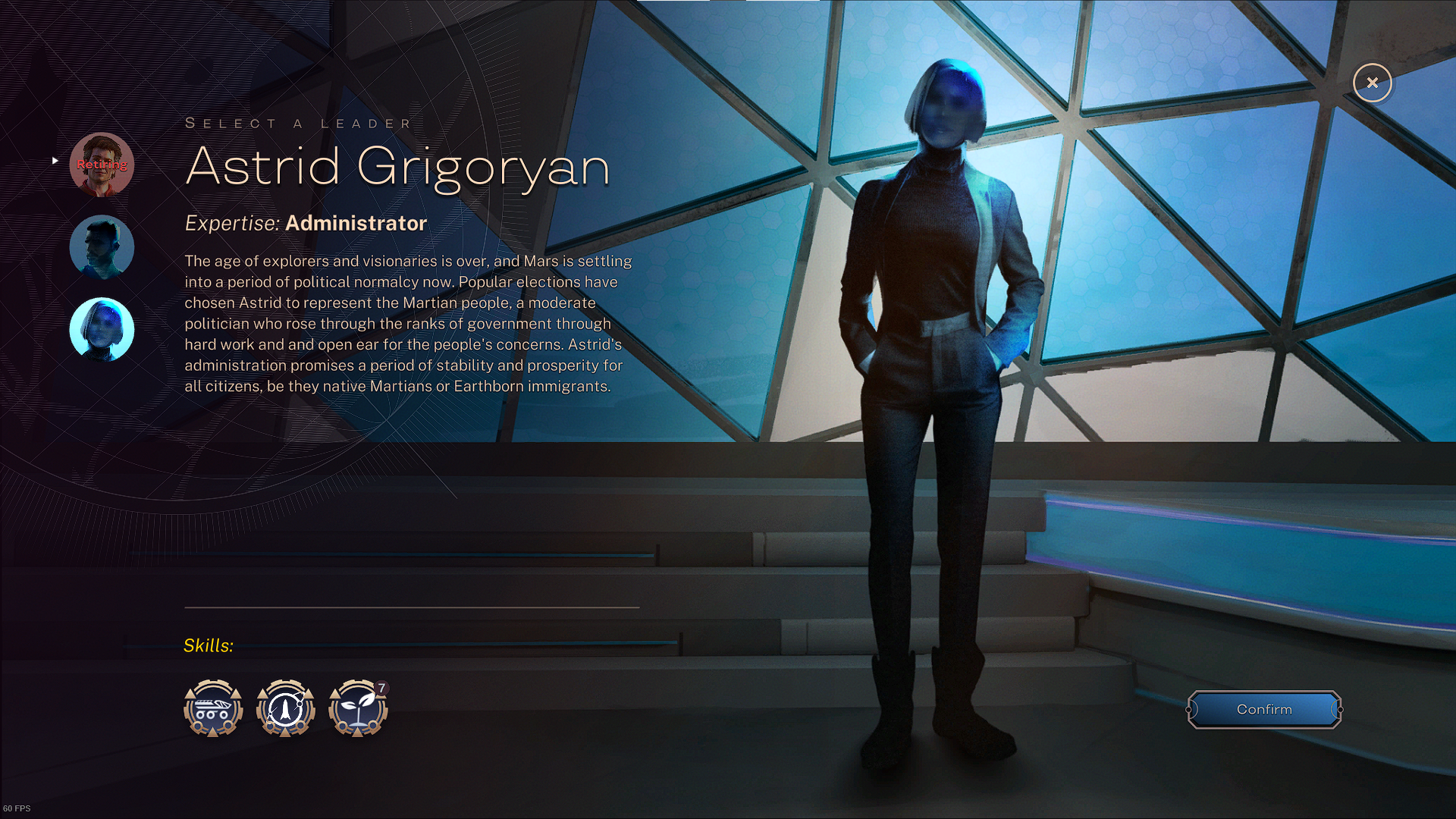 We’ve also added the “Marsyclopedia”, in which you can view all projects, lifeforms and Leaders that you’ve encountered at least once in a game. You will be able to read and compare all descriptions, and see the rarity of projects, the type of lifeform and if a leader can be presented in the early, mid or late game.

We’re also happy to say that we have finally completed unique visuals for every single building in the game.

We would like to improve the Marsyclopedia in further updates. We would like to add search and sorting functionalities to it as well as add missing content such as landmarks and their options. 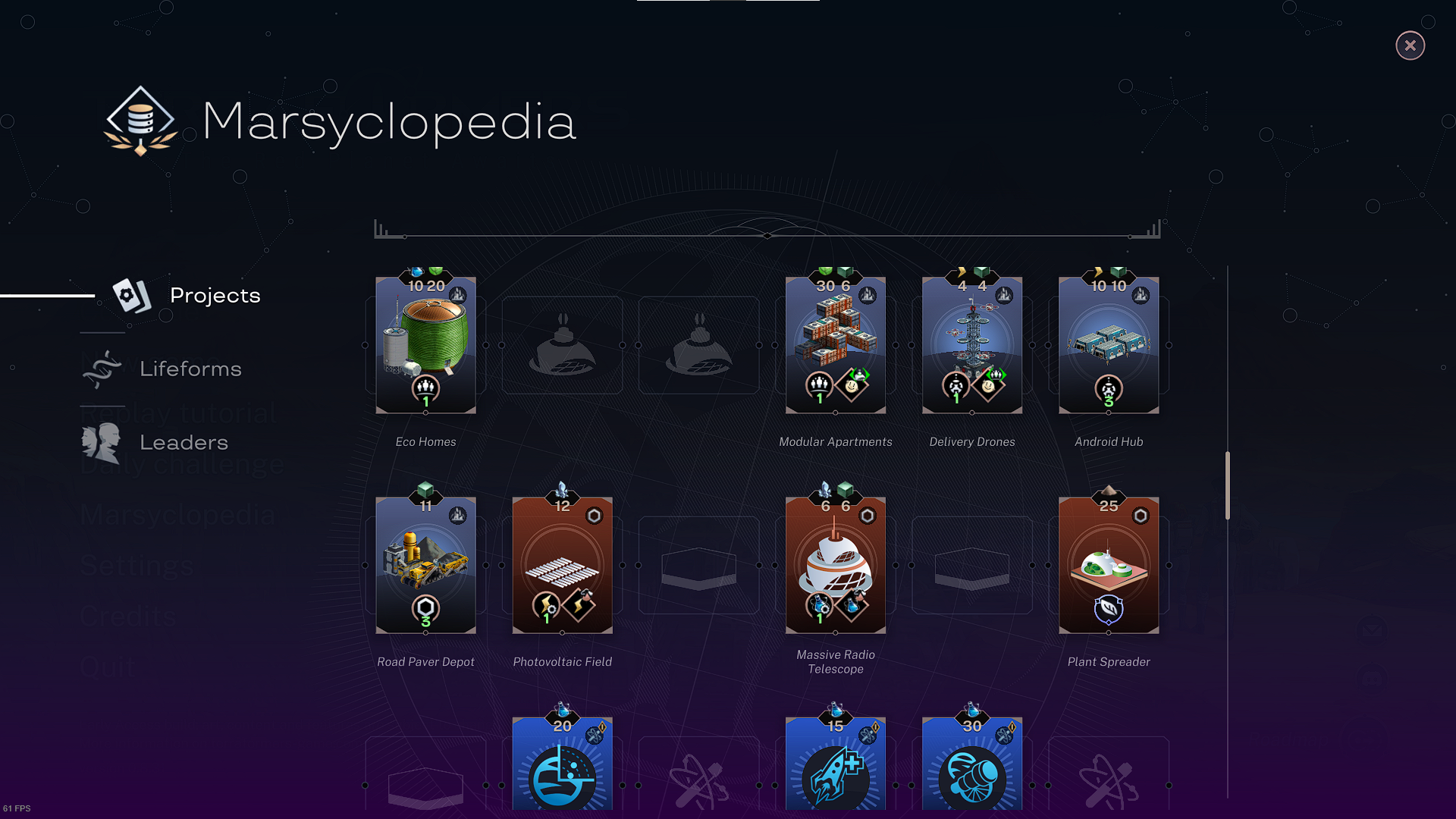 Marsyclopedia displaying which projects you have encountered and those still to discover.

We’ve had reports from players experiencing crashes in the game. As we don’t experience those ourselves, it has been challenging to fix those. We’ve made some improvements, and hope that they will help.

In addition we have also worked on solving many of the reported bugs, added many new building artworks and other small improvements.

We hope that you will enjoy this first major Early Access update, and are looking forward to hearing your feedback!